Trace Information, Transcendence, and the Proliferation of Meaning 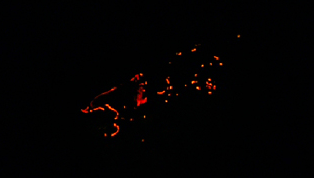 Marcia Bates’s treatment of trace information, in her Fundamental Forms of Information, seemed awfully cursory. While it fits as a necessary component within the overarching framework she establishes for information, she neglects this process of removal, compared to the ample thought given to the other aspects of her topic. But if we provide trace information further thought, it appears more significant than merely “the pattern of organization of the residue that is incidental to living processes or which remains after living processes are finished with it (Bates).”

Before we can truly comprehend the importance of trace information, we must briefly explore the foundations that Bates establishes for the entire scope of her system. In her paper, she defines information as patterns of organization, which then get encoded and embodied through how living beings store, translate, and communicate information genetically, neuro-culturally, and exosomatically. Thus, Bates constructs a vision of information as a dynamic flow through complex and interweaving channels. Metaphorically, imagine this process as a tidal pool ecosystem, where inlets bring in substance that sustains and shapes life within its bounds. Without this inflow, life shall starve; however, life also creates waste, which the living then removes by the tide pool’s outflow.

For Bates, trace information represents the function of this outflow:

She likens trace information to the “residue” that once “represented” life: “no-longer-used wasps’ nest, waste heaps, carrion, disintegrating ancient scrolls, and so on (Bates).”

All these effects are necessary for the aforementioned reasons. Nevertheless, something seems amiss when juxtaposed with this picture of carrion, an exemplar she mentioned: The very name “trace information” implies that it is beholden to the source of its trace. In her example, the residual value of the fire leveled house resides in the building that once supported life: to expand this idea, death as a slow return to dust. With this, the husk of a wasp’s nest stands as a likely forgotten testament to its time in use. But what then explains all the life in the photograph? Certainly, the lions, hyenas, and vultures find much use in this dead elephant, and apparently not for its trace of origin.

Here, questions arise, what more does death contribute? Does decay allow information to transcend its original use into something greater? Can destruction encode more into life? To further investigate, let us leave the inhospitable systems at play in the savanna for something more digestible by humans.

Before I link this next piece, I shall provide some context. William Basinski created The Disintegration Loops through his process of conversion of old tape loops, a common medium for his compositions, from analog to digital. He realized that, because of the magnetic strips’ advanced age, this transfer considerably deteriorated the music represented on the medium itself. The strips literally fell apart as he recorded them. Because he worked with short loops of larger compositions, he could track the continual degradation. In his own words:

[I] looked at the CD recorder to make sure it was on — it was — so I just sat there, listening as this gorgeous melody decayed over a period of an hour in such a beautiful way. I was just stunned […] ‘Wow, something different is happening here. I don’t need counter melodies. This is its own thing (Basinski).

Clearly, the resultant music is trace information, once from the residue of playback, and twice from the fact that Basinski found the original loops as left over from recordings stored from many years ago. But in their decay, greater meaning emerges, unexpected from what their original inert forms suggest; the sound loops would diminish in value, if their consistency remained.

September 11th, 2001 occurred during Basinski’s production, and gravely, the music symbolizes the transpired events. The linked video communicates this; the loops serve as a diminishing echo as the sun sets on the abject horror of the day. “So grave and so beautiful and stately,” the original sound mirrors the World Trade Center in its life, which then fades, in time, against the world’s growing realization of the situation.

The Disintegration Loops enable us to grapple with this reality. Because this power, Basinski’s piece, adapted for orchestra, was featured at the Temple of Dendur for the tenth anniversary of September 11th. As Basinski accounts,

[Y]ou know, no one wanted to go out that day, nobody wanted to remember an anniversary. You don’t celebrate this kind of thing, but it was a day of remembrance and several people told me how profoundly moved they were and how they felt that the whole energy had changed and somehow the resonance had lifted. Maybe, somehow, there had been a moment of healing in that silence (Basinski).

The death of a small segment of a forgotten piece of music in one man’s attic transcends into a universal expression about the transience of life. With this art, we can confront that which we do everything in our power to hide. In effect, we re-encode this trace information back into our lives, through the meaning we weave into the holes that open up in the tape.

In this case, as in many others, trace information yields a proliferation of meaning. When information starts to unbind from its original, rigid, patterns of organisation, a freedom emerges; and freedom begets new uses. The dead elephant becomes a community of consumption around which its participants activate their own patterns of organization. Therefore, trace information does not merely hold value as a residue of its source, but has latent powers in its decay for rebirth as something both novel and profoundly meaningful. Bates’ characterizes trace information justly; and now we recognize its potential impact and capabilities.

One more point of discussion, however: the practical lesson. By its own nature, the library is replete with trace information. As time progresses and thinkers, scientists, and authors propose and try fresh ideas and methods, old frameworks fall out of date. And, naturally, questions arise about the approach to this obsolescence. Should we think about old books merely in the historical context of their time, as a trace back into the minds and minutiae of their creation? Or does previously obsolete material contain yet dormant powers to re-inform? Certainly the former is obvious, the object of museums and exhibits since their inception. But, the latter, the ability to actively communicate with the past, also seems true, when we acknowledge the phoenix-like ability of trace information.

We see hints of this effect in this week’s reading of Rodger’s “New Theoretical Approaches for Human-Computer Interaction,” where Soviet Activity theory originally intended to explain “cultural practices […] in the development and historical context in which they occurred (Rodgers 103).” This lens has transcended the destruction of its initial use in context, where it now applies to contemporary studies of Human-Computer Interaction: its Soviet denotation decayed, to enable capitalist appropriation.

A final, more evident example occurred in ethical discourse, where Aristotelian virtue ethics fell out of favor during the enlightenment and resurged back into contemporary use in the 1950s (Anscombe). Today, it stands as a viable and compelling opponent to the prevailing utilitarian and deontological ethical viewpoints.

I recognize the semantic loads that some the concepts I mentioned carry. We require much further study into the true implications of trace information as it stand as part our epistemological horizon. Therein, however, lies my point. Perhaps we can now comprehend the substantial weight trace information carries, and therefore we can better explore its depths.